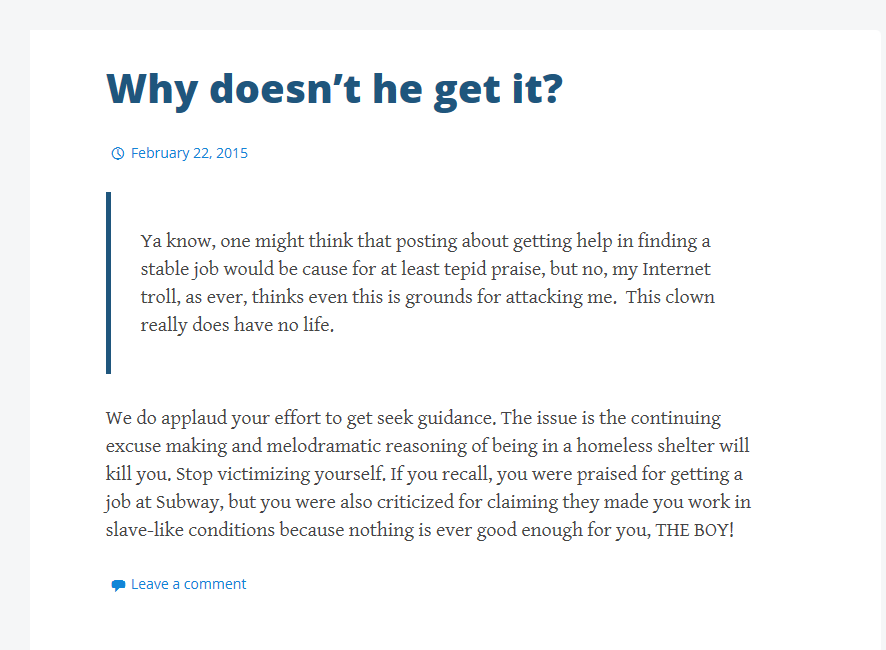 My sociopath-psychopath-narcissist-bully has been quiet lately, which is good.  The past weeks have been putting a lot more on my plate than I’d like, and I really don’t need the added stress.  Still, that got me thinking about bullies and bullying, and how related they are to sociopathy and psychopathy.  Having nothing better to do, I decided to look up some information on terms.

In this piece from nobullying.com, the primary difference appears to be that “Psychopaths have a high predisposition to violence while this may vary among sociopaths. A psychopath’s behavior is controlled and calculated; they [sic] are the masters of manipulation. A sociopath’s behavior is often impulsive and erratic. While sociopaths may form some superficial relationships, a psychopath is incapable of maintaining a true relationship. The appearance of such is all manipulation and thus disingenuous.”

So basically, a true psychopath has no real emotions, is more prone to physical violence, and has no regard for rules or laws, while a true sociopath is less likely to engage in physical violence and is prone to emotional outbursts.

Another tidbit of information worth noting is that, according Doctor Martha Stout (as quoted here), true “sociopaths make up 4% of western society (Stout, 2010). That’s about 1 in 25 people walking around among us without a conscience, without the ability to measure, or care to measure, the morality of their decisions and actions.”

That seems pretty low for percentages, but think about it: the people running things in this world happen to fall into that aforementioned four percent.  That includes businesspeople.

Okay, so what’s the real difference?  I mean, who cares what sort of fecal stain a relentless bully is?  Filth is filth.  But there are those of us who want answers, because it helps us deal better with what’s been done to us.  As it turns out, the line between narcissism and sociopathy is a thin one indeed, and very often narcissism, sociopathy, and psychopathy overlap: It is possible to be all three.

The common thread, however, is that all three types of whack-jobs are serial bullies, that is, they pick targets for their deranged behavior and go on perpetual attack, never letting up for an instant, until they’ve achieved satisfaction—and they never achieve satisfaction.

So yeah, just a bit of info-sharing.  Maybe you can gain some insight if you’re a fellow victim-survivor.